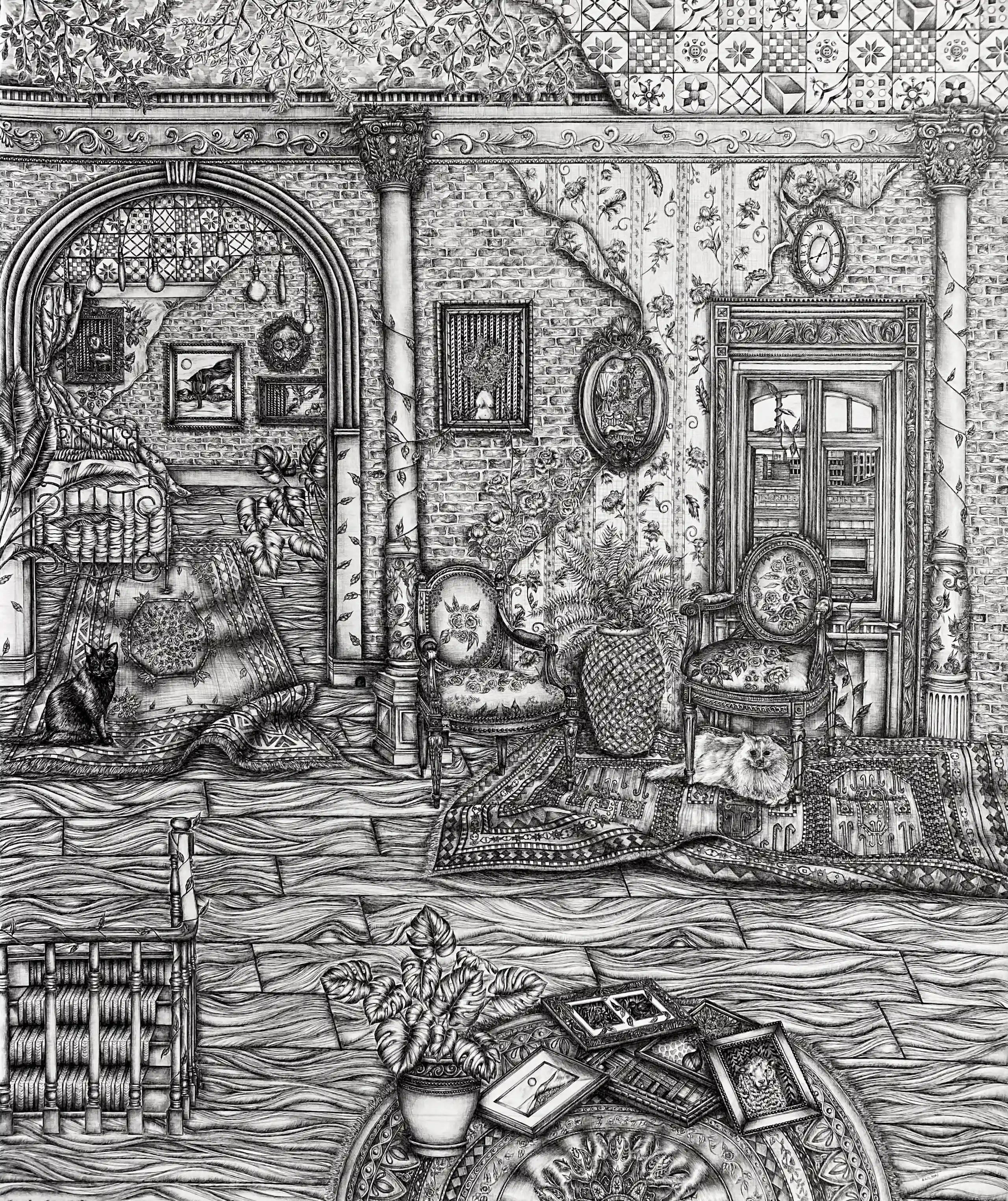 At Gallery House by Anna Wilson

Are you looking for inspiration from talented artists or an escape from home? Heed my advice and see these four contemporary artists’ work in an art gallery.

Denyse Thomasos’ just beyond collection contains more than 70 paintings and works on paper that demonstrates how she used formalist approaches to mix personal themes with politics while challenging racism and the conventions of abstraction.

About the artist: Denyse Thomasos was a Trinidadian Canadian artist who explored topics such as the African and Asian diaspora, slavery, and captivity. She earned a BA in Painting and Art History from the University of Toronto in 1987 and completed her MFA in painting and sculpture at Yale School of Art. Major corporate and governmental organizations have all acquired pieces of her work such as Rutgers University, the Bank of Montreal’s operational headquarters in Toronto, the Art Gallery of Guelph, the University of Toronto, and numerous private collections across Canada and the United States.

Why you should see this exhibit: Her paintings add a level of complexity and are multi-faceted. Aspiring artists will appreciate and learn from her body of work as they embark on their creative journey. Also, many of her paintings in this exhibit haven’t been revealed before, so you will get to see and appreciate new artwork.

Let’s Survive Forever features the visitor being inside a large, mirrored room with mirrored spheres hanging from the ceiling and arranged on the floor. A sense of infinity is offered through the play of reflections between the circular shapes and the surrounding mirrors.

About the artist: Yayoi Kusama is a Japanese contemporary artist who grew up in Matsumoto, Japan. After WWII, at the age of 19, she travelled to Kyoto to study the ancient Japanese painting technique known as Nihonga. Kusama created her first Infinity Mirror Room in 1965. Kusama has created over twenty unique rooms since then. Paintings, performances, room-size presentations, outdoor sculpture installations, literary works, films, fashion, and design comprise her diverse body of work. In 1993, she became the first woman to have a solo presentation at the Venice Biennale’s Japanese Pavilion, and in 2016, Time magazine named her one of the most influential people in the world.

Why you should see this exhibit: Kusama is considered one of the best living artists and Let’s Survive Forever is one of her masterpieces. It is a beautiful, mesmerizing piece of work that allows the viewer to disappear into another world unlike one they have seen before.

The Gatherings exhibition features over 30 paintings depicting Roger's 35-year career. It equally contains artwork from both father-and-son Hamilton artists Roger Ferreira and Kareem-Anthony Ferreira which include topics such as Black culture, Canada, Trinidad, and family.

About the artist: In the late 1980s, Roger and his family moved to Hamilton, and he started working with kids and young people to share his knowledge. For more than 15 years, Roger taught at Columbia College and in the Catholic school system. He also developed a career as an art instructor in the city of Hamilton. Kareem was born in Canada not long after his parents left Trinidad. Before earning his MFA at the University of Arizona in 2020, Kareem studied fine art at McMaster University and now creates paintings that resemble memories of growing up in Hamilton and Trinidad.

Why you should see this exhibit: It explores how both artists interact with their cultures and equally immerses viewers into a world of visual identities and family that makes memories and events feel personal and familiar. We learn and get inspired by studying what has been done in the past.

About Time investigates the Korean diasporic experience as influenced by intertwined vestiges of colonialism, imperialism, and militarism through photography, video, and installation. The exhibition focuses on Jin-me’s ongoing prioritization of the constellation of relationships between people and places across time and space.

About the artist: Jin-me Yoon is a South Korean-Canadian contemporary artist whose art talks about culture, ethnicity, gender, and sexuality. She earned her MFA from Concordia University in 1992 after earning her BA in psychology from the University of British Columbia in 1985. She was awarded a Smithsonian Artist Research Fellowship in 2013. She is currently an instructor at Simon Fraser University’s School for the Contemporary Arts.

Why you should see this exhibit: By studying artworks about historical events, we can travel back in time and experience a moment different from our own. This can help us appreciate the differences and inspire new ideas.