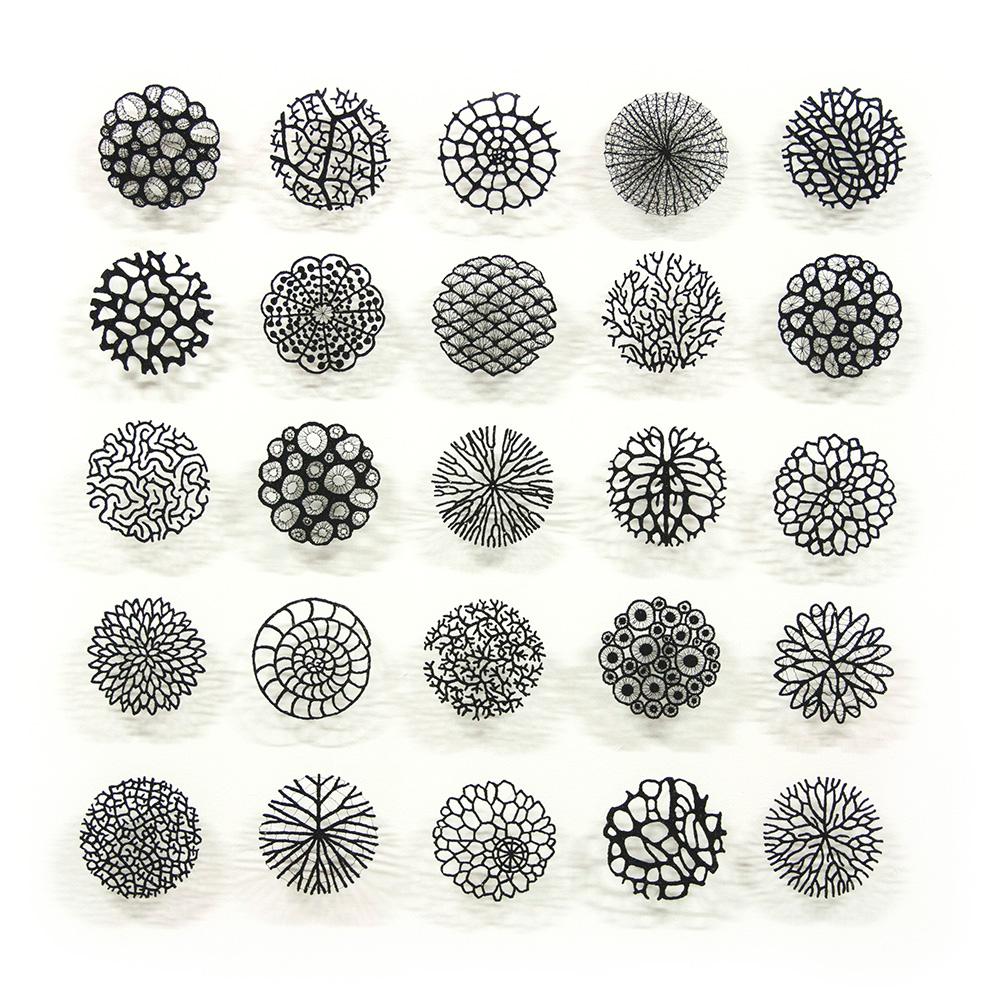 TYPOLOGIES by Meredith Woolnough, from meredithwoolnough.com.au

How textile artists are using the history of their medium to make modern statements.

Some art forms require a lot of materials before you can get started, or some semblance of artistic vision. As someone with neither, embroidery is a great way to branch out into art, without having to buy a ton of supplies. With only a needle, some thread, cool fabric and an embroidery hoop, you can get started! Embroidery is a mixed media art form that has been growing a following in the last few years. No longer just a hobby or a cool way to mend clothes,embroidery is now being shaped and adapted by innovative artists around the world into a mixed media masterpiece.

Embroidery has been re-emerging as an art form ever since artists around the world began preserving vintage embroidered clothes to use as wall-art. Now, it has branched out into a huge movement, with an extensive variety of mediums and styles. However, the most interesting part of embroidery as an art form is that it is not new at all. In fact, embroidery and other forms of “domestic art,” played a key part in women’s rights.

Before the women’s uprising, the life of a girl was taken up with caring for siblings and children, tending the home, and doing household chores. One of the key parts of any young woman’s childhood was training to sew and embroider, and not being able to do so was a huge source of shame. Eventually, women used these domestic skills for more than just fixing holes in socks. They began making embroidery into art; full pieces to be displayed on walls, pillows, or in frames. However, it was not seen as art until much later. It was no longer just a hobby, but part of the women’s rights movement.

A key artist in the continued work in the feminist movement, Eliza Bennet has started a project with a rather controversial medium; her own hand. To further understand the thankless work of women, both domestically and in the fashion industry, Bennet has created a series of pieces titled A Woman’s Work is Never Done, using her own hand as the canvas. In it, she has pieces which involve embroidering through the uppermost skin of her palm, emulating that of someone who has calluses and rough, blistered skin from labour. Though some critics say her art is a form of public self harm, that is not the case. It is a remark on the human and female rights that have been overlooked for hundreds of years, especially in discussions of cheap labour and its effects on those who work under it.

Embroidery has always had a role in art, often lending texture and fine detail to paintings, but it has been revolutionized to be a form of social statement. Artist Fathy Chapin has been using embroidery in his paintings, which offer political and social justice messages, through the presence of clothing with embroidery on it that represents his culture. A key piece is his painting “My Country,” which features a traditional embroidered Palestinian dress.

The art form has continued to evolve since then, with many contemporary artists leaning into embroidery’s focus on colour and capturing an environment with emotion and depth. The current trends in this mixed media art form comes with a re-imagining of the boundaries of the craft. Recently, artist Severija Incirauskaite-Kriauneviciene has been exploring alternative canvases for her embroidery, such as car hoods and metal buckets, to transform the views of embroidery from sweetness to something with more substance.

Another trend with modern embroidery/textile art is the focus on natural subjects. Artists like Ana Teresa Barboza and Meredith Woulnough have been going off of and outside the embroidery hoop with their work. Barboza has begun a series of pieces which flow out of her hoop, capturing the waves and movement of the nature scenes and plants that she bases her art on. Similarly, Woulnugh uses water-soluble cloth and a sewing machine to create see-through designs which draw attention to the incredible detail of underwater organisms and veiny plants. Her pieces are then preserved in shadow-boxes.

Fashion designer Olya Gkaoleva and artist Lisa Smirnova collaborated on another revolutionary statement, taking a collection of clothing pieces and turning them into wearable art through embroidery. Each hand-embroidered piece took upwards of 100 hours, and the combined collection works together to tell a story. The collection, called Artist at Home, was designed to show how art does not have to remain still, but can be worn and displayed all at once.

Embroidery has become a way for artists to remark on the state of the world and protest the injustices that come with it. The history of embroidery has always been entrenched in social revolution, and its original goal has been carried into the 21st century, addressing modern issues through silent, beautiful protest.

wlande199925 replied 2 weeks, 6 days ago Never thought of Embroidery in this way