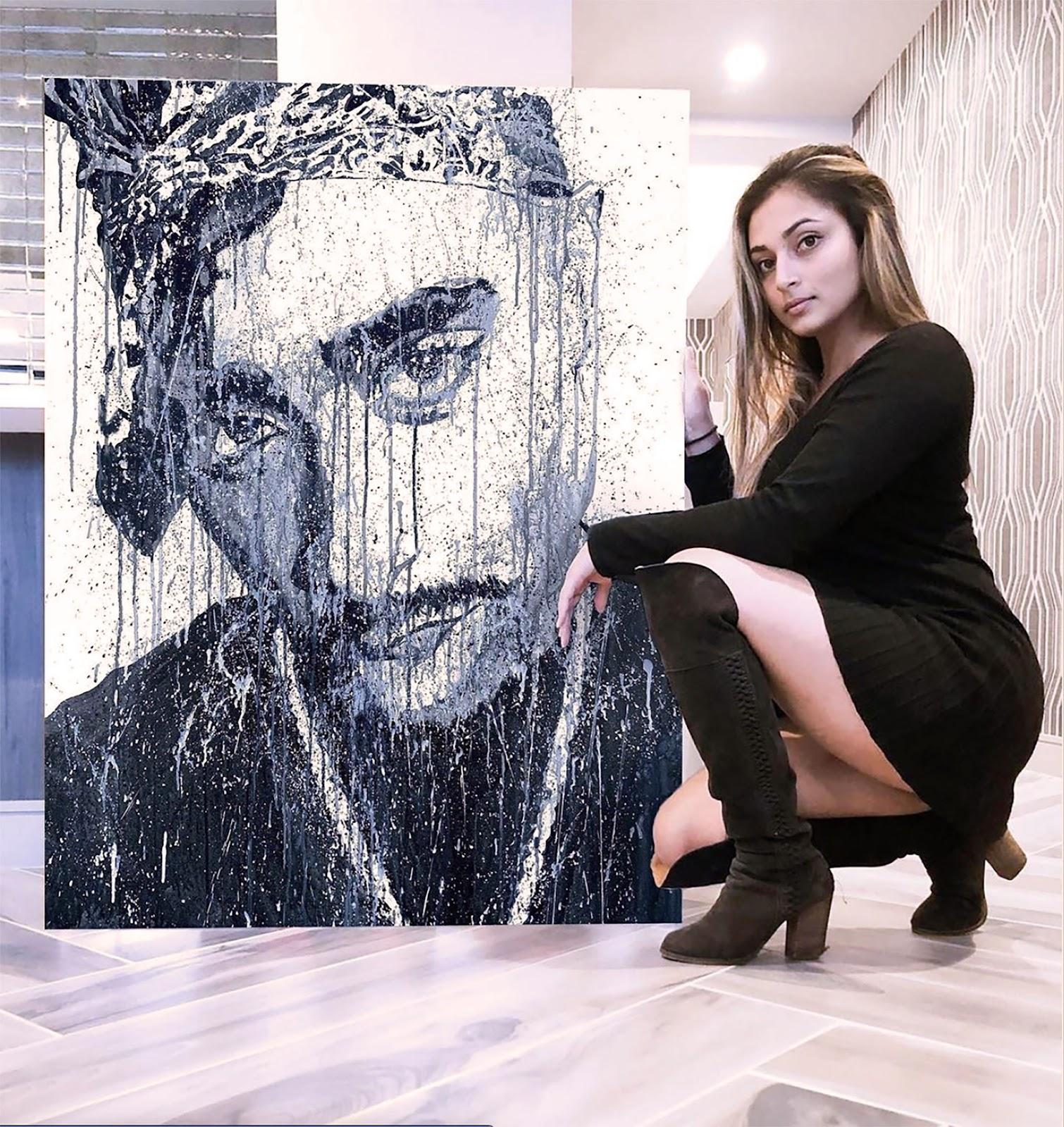 Pratiksha Muir with her painting, “Tupac”

Talented painter Pratiksha Muir shares how she began painting, her creative challenges, and why taking risks is so important.

Pratiksha Muir, or simply P, is a dedicated artist known for her drip-painting and urban style portraits. From MTV personalities to Grammy-award winning artists, she has commissioned pieces for an impressive audience. Currently living in Austin, Texas, the New-Jersey born painter recently sat down with Bidgala to dive into her exciting world.

P is as easy to talk to as her art is fascinating. Before starting the official interview, she shared that her name “Pratiksha” means “waiting”. She was born 2 weeks late and her parents thought it would be fitting. Ironically enough, P’s go-getter attitude is anything but slow.

Before starting her career as an independent artist, P had always loved creating. The self-labeled “hobby-hopper” found painting in 2017, and couldn't stop from then on. She taught herself the fundamentals with the help of YouTube videos. By 2019, she quit her phone sales job to do art full-time. “I was with the company for almost 5 years and I really appreciated it. Even though I knew, towards the end, that that wasn’t the career path for me, I do look back and realize how much I learned. I was able to take some of those skills with me and apply them when I started doing my own thing with art.”

We discussed how many artists take the risk of leaving one career for the next. That leap can be scary and confusing. Paths can change so drastically; P studied psychology and communications, so she never thought she’d end up where she is now. The artist admitted that hearing similar stories from other artists was a huge inspiration and boost of confidence when switching her career. The only way to do it was to jump right in and hope for the best. “There was never going to be a perfect time for me to make a smooth transition from what I was doing to what I wanted to do.”

This huge change didn’t come without challenges. Starting out was difficult and finding her style, as many artists experience, was frustrating. “I was receiving these commission jobs and felt like I completely lost my voice.” Each painting was so different from the next and she, understandably, wanted to make her clients happy. “While I was going through that, I just was not enjoying it and I thought; you know what? Maybe this isn't for me. Maybe I should do something else.” Fortunately, the very next day, P found herself in the studio and let her creativity flow. “I wasn’t trying to make it perfect or fit someone else’s view; and that was the same day I created Tupac. Tupac was the first drip-style painting that I ever did.”

When asked how inspiration comes to her, P explained that it doesn’t hit her in one moment. A change in perspective, perhaps from a new place or from meeting new people, is what drives her work. “I really love an attitude. I love people with a story, I like places that are imperfect. It’s all about piecing things together and seeing what I can create.”

P’s art mainly consists of portraiture, and with this, she tries to make sure she still has an emotional connection to the work. Painting faces that she can relate to is at the forefront of her practice. Oftentimes, the figures will be unsmiling, creating power and drama. “I don't want people to just say ‘that’s cool!' I want to have a feeling attached to it. That's what fuels my chaotic urban-style splattered approach.”

P has always been fascinated by icons whose lives were revealed to the whole world. “I have a deep love and appreciation for those who lived their lives doing a lot more for other people. Like the people who were misunderstood, or the people who were unapologetic.” A bit of a “rebel” growing up, P knew the importance of school, but founded her own beliefs and followed them. She resonates with the faces she paints, and also chooses to live unapologetically. “When you’re a kid, you are told that when you’re an adult you can do whatever you want. But most adults don’t choose to do what they want. They get a psychology major and then they take a phone sales job and then they’re stuck in that industry for the next 30 years living with a white-picket fence with three kids and they’re miserable. You have to work on where you want to be in the next 5, 10, 30 years, otherwise that will be chosen for you.”

When it comes to the viewer’s experience with her work, P recognizes pop culture as a “huge mediator for art”. As she put it, “Pop culture references come with a strong connection to the viewer.” P’s depictions of widely recognizable celebrities like Prince, Marilyn Monroe, and Jimi Hendrix give her audience a foundation to work with. P explained, “That story starts in the middle of the connection that the viewer has with the subject. From there, you get to twist the narrative and then make something that’s familiar, unfamiliar or interesting.”

When asked if she could pinpoint her favorite piece, P admitted, “My favorite pieces rarely have to do with how the painting turned out. Rather, they have to do with the ones I’ve really struggled with or the ones that I was painting while I was working on other parts of my life. One that comes to mind is my first large-canvas painting. I painted Viper on it and realized wow, I can do this. I might mess up the next four paintings, but this one proves to me that I have the ability to do it.”

Despite any obstacles, P has proven to be a highly skilled and resilient artist. Through her experience, she has gathered so much knowledge on the art world. When it comes to online art markets like Bidgala, P commented that they are vital for artists right now, as we no longer live in a gallery-centric industry. “There has never been a better time for a creative to seize their own business and set their own terms. Marketplaces like Bidgala can help that journey.”

P ended her interview with a few wise words for emerging artists: “You can be as big as you dream. With art, it is scarier in the moment to figure everything out and it can be overwhelming because you have to wear all the hats. But, the beautiful part about it is that no one can put a cap on where you want to go and what you dream.”

Pratiksha Muir’s paintings can be found on Bidgala.