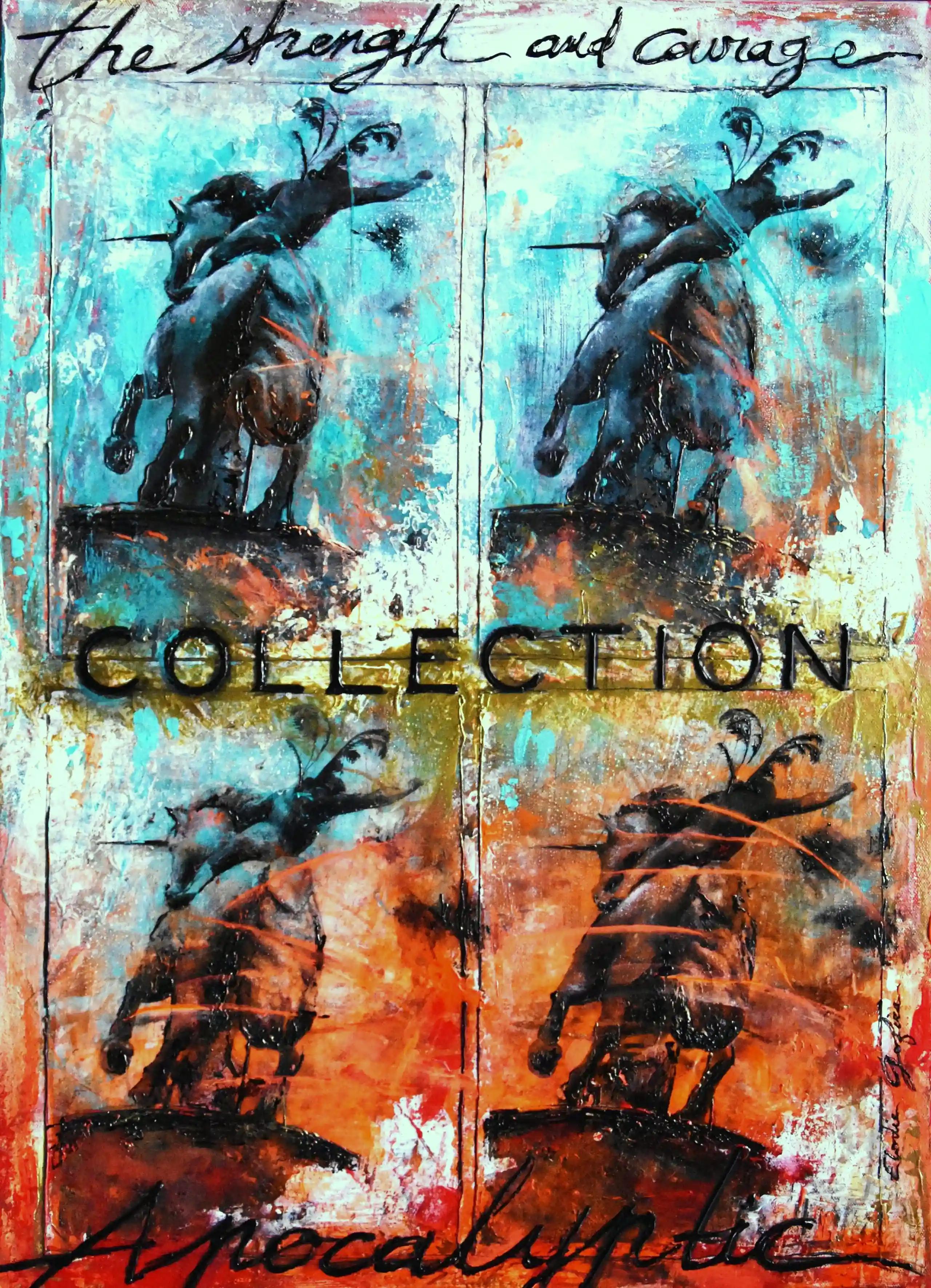 Apocalyptic, The Strength and Courage Collection by Elodie G. Fira

While most art lovers associate art with aesthetics, many in the art community use their platforms to bring light to political issues. Here are 5 influential political artworks of the 21st century.

First appearing on the wall separating Israel and Palestine, this iconic graffiti art comments on the ongoing territorial conflict. Given Banksy's anonymity, many in the art community speculate on the specific influence of the piece. Some have noted the similarities between this piece and photographs from protests in the 60s; specifically, the image Flower Power. Others suggest that the splash of colour in the flowers indicates support for the LGBT+ community. Regardless of Banksy's inspiration, the visual art's message is clear: we should think about resolving conflict with peaceful solutions rather than violence.

This photography project depicts Palestinian and Israeli people making similar expressions. These large photographs were installed in various public places in Israeli and Palestinian cities. The artists wanted to show that these two groups of people were more alike than they may think. "We decided to go together to the Middle East to figure out why Palestinians and Israelis couldn't find a way to get along… After a week, we had the exact same conclusion: these people look the same; they speak almost the same language, like twin brothers raised in different families… It's obvious, but they don't see that. We must put them face to face. They will realize." Despite it being one of the largest illegal  photography  exhibits, the artists hoped their work would help bring two warring peoples together to find a peaceful solution where both countries have internationally-recognized borders.

Made with metal armature and 9000 backpacks, Remembering  was displayed on the face of Haus der Kunst, in Munich.  Art lovers could have seen this display with the rest of Ai's exhibition, So Sorry, from October 2009 to January 2010. The unique mural spells out, "She lived happily for seven years in this world," in Chinese characters. This was a reaction to the 2008 earthquake in Sichuan, China. Because the schools were built quickly and poorly, thousands of children were trapped and killed in the natural disaster. Ai also critiques the Chinese government by providing a blog post that lists the names of all the earthquake victims. The political commentary and critique in his visual media made Weiwei a victim of the Chinese government, leading to his arrest and detainment in 2011. He currently resides in Montemor-O-Novo, Portugal while maintaining a base and studio in Cambridge and Berlin respectively.

On the cover of the May 9-22 issue of New York magazine, Kruger revamped her 1989 art piece Untitled (Your body is a battleground). The cover depicts the black and white image of a woman, with bold red and white text asking the question, "Who Becomes a 'Murderer' in Post-Roe America?" The piece is meant to challenge right-leaning Americans, specifically lawmakers, as Kruger believes they haven't considered the question. In an email to Artnet News, she writes "Is the ‘little lady’ capable of making that decision, or does the doctor or medical facility do the time or worse because the woman can’t possibly be capable of making the decision on her own?" The visual art piece was first created for the March for Women's Lives in Washington D.C. in 1989, an earlier instance of activists responding to anti-abortion legislation.

The art community has internationally expressed their support for Ukraine - some through street art depicting calls for peace and shaming Putin, and others through using their art to raise money for Ukrainian relief. But one of the most admirable forms of protest art was that backed by the Ukrainian Government itself. During the World Economic Forum in Davos, Switzerland, Ukrainian artists rented a building known as "Russia House" and transformed it into an exhibition exposing the toll the war has taken on the Ukrainian citizens. From May 23 to 26, the world's wealthiest art enthusiasts visited the "Russia War Crime House" and saw photographs of bombed cities and human suffering. While the exhibit is now closed, you can watch the exhibition opening on YouTube.